While I am sure it is not their intent, the way British Airways surveys both its general and special customers is the worst I have ever seen from any company, from a customer perspective. Perhaps paradoxically, it is one of the richest possible from an internal British Airways perspective. It provides them with a rich set of reports and metrics. While it includes part of the Net Promoter System, it has far too many screens and questions. They have never contacted me about my issues or improvement suggestions. What follows is a critique that includes screen captures from their September 2016 Executive Club survey. Please bear in mind that I am not entirely negative about it all. I just feel it works from an old paradigm, is internally focused, and designed primarily to fit customer experience strategy and reporting software supplied by KPMG Nunwood.

While the covering email from Nunwood says the survey will take 15 minutes, there are 134 screens to go through, and it is hard to see how it could be done in 15 minutes. The survey invitation is signed by James Hiller, with no job title. A Google search indicates he manages the Executive Club. Nothing is said about what they have improved based on past surveys.

As distinct from a pure survey about the Executive Club itself, competitors are also covered, as are BA and competing airlines. The huge amount of data collected probably fits a comprehensive internal reporting structure, and provides no particular value to customers. It violates the fundamental principle of customer research in that it fails to provide more value than it extracts. Here is how it starts:

Given that you are an Executive Club Member, we would welcome your views on your experiences with British Airways and we would like to understand how they have influenced the way you feel about us.

Whether positive, neutral, or negative, your feedback is welcome and highly valued, as it will help us to shape our products and services in the future, and understand what our most valuable customers need from us.

The survey will take about 15 minutes to complete.

Will I be able to provide the input I want to provide?

Before starting to work through the many screens, I decided what I wanted to say. I wanted to make three points:

I expected BA to provide a choice of languages for the survey, and they do. I suppose it is a bit surprising that Spanish is not among the languages. It is the second-most common first language in the world with about 400 million speakers, after Chinese, with 1.2 billion.

Logically, the following question should be about what BA should improve. That question is never asked about British Airways, though it is asked about the Executive Club, close to the end of the survey. When you do not ask for improvement suggestions, you tend not to get any from Promoters. Remember that Promoters are the customers who admire you most, and want you to succeed. They tend to provide the most valuable improvement suggestions.

Questions about my feelings about the airline follow. I suppose these provide overall statistics and somebody is measured on the trend. It is hard to see how someone would work directly on improvements from the answers, as there is no opportunity to explain the input. The questions all use rating scales and include:

A useful section follows as shown below. After asking what airlines I have used for long- and short-haul travel in the last 12 months, the survey goes on to ask which airlines are my top choices for such travel. It then asks why the first-choice airline is in first place. I consider this section to be the only thing that is potentially useful beyond the basic NPS questions. 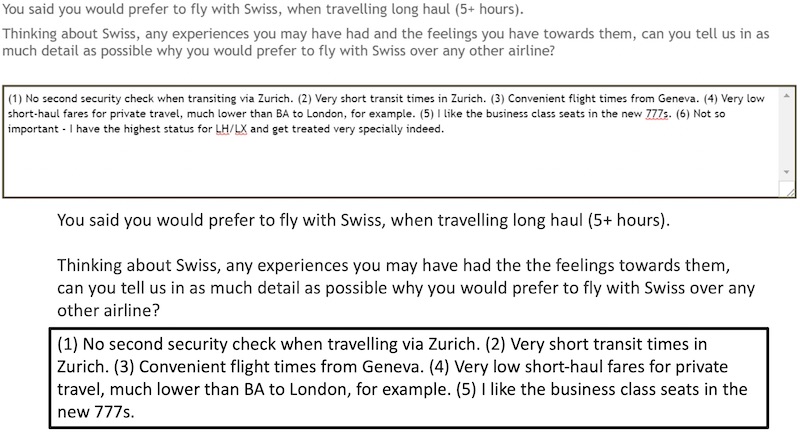 Oddly, they sort of throw this away by asking you to choose from a list of possible responses for not flying with BA. None of the preselected reasons was my main one, so I filled in the Other box. I feel they should have asked this as an open text question.

Then you are asked again about your overall satisfaction with BA. You can’t see the answers to prior questions and my second answer to the same question was one category lower than the first. Maybe because the survey was making my opinion more negative. The wording of the question was not exactly the same as the first one, though I don’t recognize them as different questions.

A seven-point scale is then used to gather answers on flying touchpoints, emotions associated with BA and opinions about their communication. Finally, the section on the Executive Club starts, at last. Remember that the email invitation came from the head of the Executive Club, not the head of British Airways. Overall satisfaction and recommendation questions are followed by another extensive batch of seven-point rating scales Each rating question is presented individually, and you can review your answers to each section, possibly making changes.

A breath of hope is provided by the question “And finally, thinking about your experiences of any frequent flyer programmes, how could British Airways Executive Club be improved?” I mistakenly thought this was the last question. Unfortunately, I was then asked seven questions about demographic information that BA should already have in my Executive Club profile. This is one of the disadvantages of subcontracting surveys. The confidentiality agreement you have with your customers probably forbids you passing their details to a third party. However, the way BA has handled this with Nunwood is not optimal. Since they already had my name, there would be no reason not to provide them with a unique code, that would then allow BA to match my name and demographic details with their own database. The name on its own might be a duplicate.

I recommend a visit to the KPMG Nunwood website at www.nunwood.com. Their offers include customer experience strategy, journey mapping, NPS support and other comprehensive approaches to improvement. One of the approaches, the ‘Six Pillars’ explains their satisfaction surveys. The excessive number of questions satisfies the needs of the Six Pillars model, and fully exploits their Fizz reporting software.

I speculate that the survey and software are part of a larger consulting engagement with British Airways that requires a ‘slice and dice’ approach to data for distribution to a variety of internal departments. I feel this is an internally-focused way of proceeding. I would love to know what their response rates are, and speculate that they are under 10% overall. I suppose that higher-status members will be more likely to give feedback, and their input is critical, since they generate the most revenue for the company. I believe an interesting opportunity would be lower-status members who have higher status on other airlines. My recommendation for BA is an A/B split test, asking just the basic few NPS questions as a ‘pulse’ survey in between the main ones. I believe they would get better response rates and clearer actions to prioritize. Of course, they would lose the ‘slice-and-dice’ metrics they probably use to measure people. And finally, I have of course lost all my status and privileges with BA since retiring, so don’t know whether they have changed the way they survey Executive Club members since then. Please feel free to reply below if you have new information.