Welcome to the 27th article in my series on the Net Promoter Score and System. You can read all of the prior articles on our blog page here.

Nike and Lululemon are probably the two most respected and recommended sports clothing brands as I write this. What I want to relate is what goes wrong when a brand tries to support a non-core product. The product in question is the running application for iOS and Android called the Nike+ Run Club. Please put yourself back a little in time. I originally wrote this almost three years ago and have decided not to edit the present tense I used at the time.

I have been using the Nike+ running app for a couple of years on my iPhone and have logged over 1,000 kilometers (600 miles). The Run Club is the latest version, which I currently have on my iPhone 6. I always use kilometers as my units. On the second run with the new version, the displayed number was a distance in miles, but the units displayed were kilometers. My average pace showed as 8 minutes per kilometer, rather than my usual 5. I checked the distance I had run online, and confirmed the nature of the error. First stop, the Nike web page devoted to their applications. Nothing found in their Frequently Asked Questions. A note there directed me to their Facebook page as one support option, saying it works from 9 a.m. to 6 p.m. Pacific time. So, I went there to share my experience and ask for help.

They have apparently not heard of their own app

The Facebook experience was quite surprising. I used their search function to find out whether anyone else had had the same problem. Apparently not. I decided to explain my own. Describing it was not a problem. Using their pull-downs to categorize it was a problem. First, the app was not listed. Since an old version was there, I selected that (the Nike+ Running App), as shown in the diagram below.

Then I was asked to supply my OS version. As I write this, iOS 10 has been released. Apparently, Nike had not yet heard of iOS 9. 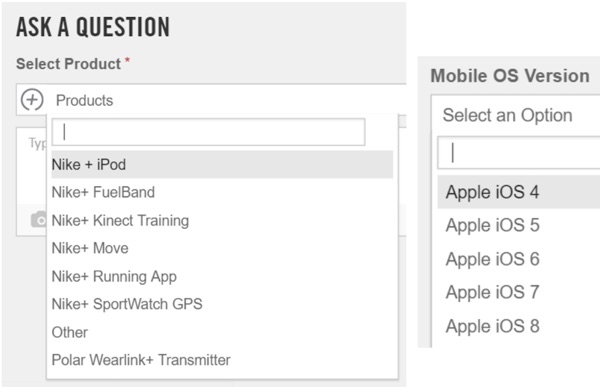 So I deleted the Nike+ Run Club app and installed the Endomondo Sports Tracker app instead. Endomondo is owned by sports clothing manufacturer Under Armour. Your Detractors will leave you if they complain and you do nothing to respond. All my running clothing is from Nike. Will I start to look more favorably on Under Armour gear? Only time will tell.

The next article will be the first in a set about the robust operational and analytical infrastructure you need to have a successful Net Promoter System implementation. It is all about the team and the tools you need.