There are two parts to the answer. First, the score does not tell you much on its own. The reasons customers give for the scores and what they want you to improve are more important. Second, the absolute number is meaningless. What matters are how it compares to your competition and whether it is improving or getting worse. Let’s start by talking about the score.

Not alone are average NPS scores quite different by industry, they vary widely within an industry. The graph below shows the results of a Temkin benchmark survey, for example. The overall message you should take here is that a single number is meaningless in isolation. An NPS of 15 is horrible for a supermarket and approaches best-in-class for an ISP or cable TV provider. There is one subtlety in NPS theory that is worth noting here: you gain or lose share when your NPS trend is more or less favorable compared to the leading competitor. The Temkin table considers all competitors to be equal when calculating the average score. Some of the extreme scores below will be for companies that may not be relevant (unless they happen to be your own company).

Moving from the facts in the chart to personal opinion, the five industries at the bottom of the table seem to share some characteristics. They are mainly companies that either are monopolies or used to be monopolies. In many cities or neighborhoods, there used to be only one way of getting TV, which was via your local cable network provider. Internet Service Providers suffered from a similar lack of competition. It is somewhat unfortunate that the new alternatives to cable television are dependent on ISPs for delivery.

As noted at the bottom, the graph expresses the views of US consumers. I believe the relative positions of different industries do not change much by country. The scores do vary by country, as I will discussed in a later article. 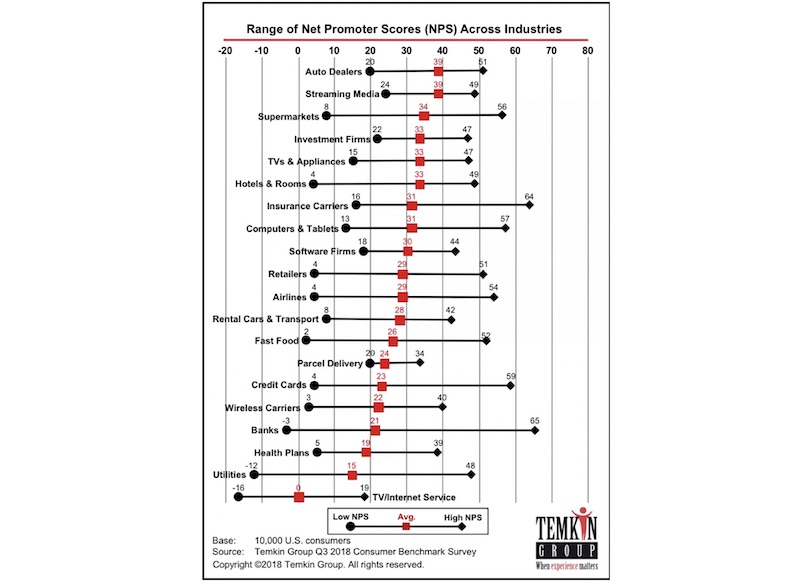 The variations by industry are of course not unique to NPS. The table below shows the American Customer Satisfaction Index scores by industry as of early 2019. The pattern resembles that for NPS scores. Since NPS numbers can vary from -100 to +100, and ACSI numbers only from 0 to 100, it is normal that there is far less variation in the ACSI scale. Remember that these are not NPS numbers.

Communicating the ‘goodness’ of your NPS number

Once you are confident you understand the range of scores for your industry and geographical coverage, I suggest communicating some round numbers in a consistent way. For example, if you are in the supermarket business in the USA, try saying “30 is good, 40 is great, 50 is world-class.” Make sure you understand where your most important competitor is within the range.

I suppose I am being polite here. I have seen too many companies trumpeting things like “Our NPS is 92.” Without any qualifier, the only acceptable source you should use for such statements is a reputable double-blind benchmark survey. If you use anything else, you should at least provide the source. I have been reading double-blind benchmark survey results for many industries for many years. A score of 92 is rare, to say the least. CEOs increasingly refer to such unattributed NPS numbers in their annual reports and earnings calls. I hope the emergence of the Bain / Qualtrics NPS Prism benchmarking service and similar offerings will make it easier for CEOs to provide recognizable sources for their statements.

The next article in this series will cover the use of customer answers to the open ‘Why?’ and ‘What should we improve?’ questions.